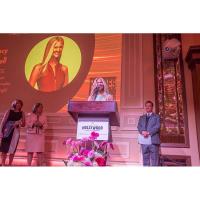 The Heroes Of Hollywood Luncheon presented by the Hollywood Chamber Of Commerce Community Foundation honored 'Entertainment Tonight' Host Nancy O’Dell with the Mary Pickford Award on June 1st, at the Taglyan Cultural Complex in Hollywood.

Returning for another year in their role as Co-chairs were Carol Sarian and Cindy Braun. ABC Entertainment guru George Pennachio served as celebrity Emcee.
View the 2017 Heroes of Hollywood Commemorative Book
This prestigious award is given to a celebrity who has made a difference in the entertainment industry and the Hollywood community. O’Dell is an Emmy Award-winning entertainment journalist and producer with more than 20 years of experience. She began her broadcasting career as a reporter and anchor in South Carolina and Miami. Shortly thereafter, O’Dell joined Access Hollywood and was named one of Television Week’s “10 Most Bankable Stars in Syndication.” She is a go-to anchor for live TV specials and has hosted red carpet specials at the Grammy’s, Emmy’s, and Golden Globe’s. She has contributed to NBC’s Today Show and Dateline and contributes to CBS This Morning.

O’Dell has been honored with two Emmy Awards, three Associated Press Awards, and two Society of Professional Journalists (SPJ) Awards. In 2012, O’Dell was honored in New York Moves Magazine: Power Women issue as one of the most influential and successful women in her particular field. The Alliance for Women in Media honored O’Dell in 2013 with their esteemed Genii Award for Excellence in Television. Also in 2013, O’Dell was asked to host the highly-respected National Association of Broadcasters Luncheon.

After her mother passed away in 2008 from complications related to ALS, O’Dell became a National Vice President of the Muscular Dystrophy Association and serves as the spokesperson for ALS.net. In 2009, MDA, O’Dell and O’Dell’s family formed a foundation in her mother’s name called Betty’s Battle: Fighting ALS. In 2002, O’Dell was inducted into the American Red Cross’s National Celebrity Cabinet and remains in that position today. She also acts as an international board member for Best Buddies, a nonprofit organization whose mission is to enhance the lives of people with intellectual disabilities.

Founder and Owner of the Hollywood Museum Donelle Dadigan received the Distinguished Service Award in Memory of Johnny Grant making history by being the first woman to be recognized with the Johnny Grant award.