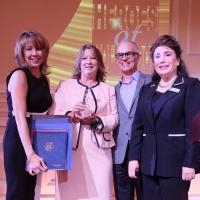 The Heroes Of Hollywood Awards luncheon presented by the Hollywood Chamber Of Commerce Community Foundation honored Founder and Owner of the Hollywood Museum Donelle Dadigan with the Distinguished Service Award in Memory of Johnny Grant making history by being the first woman to be recognized with the Johnny Grant award.

More than 400 people attended the annual fundraiser which was held at the Taglyan Cultural Complex in Hollywood on June 1st. Returning for another year in their roles as Co-chairs were Carol Sarian and Cindy Braun. ABC Entertainment guru George Pennachio served as celebrity Emcee.

Our honoree Donelle Dadigan grew up learning the importance of two life lessons - helping shape lives of others and giving back to the community. “D.D.” is devoted to all things Hollywood.

She is President and Founder of two not-for-profit organizations. The José Iturbi Foundation is dedicated to “popularizing classical music…. one note at time!”® And, the Hollywood Museum, now considered the official museum of Hollywood (designation bestowed by Hollywood’s Honorary Mayor Johnny Grant). As a philanthropist and lover of history, Donelle wanted to create something meaningful for the Hollywood community. The Hollywood Museum, located just steps from the Hollywood Walk of Fame, is dedicated to the history and heritage of Hollywood and the entertainment industry.  With 10,000 real show business treasures showcasing more than 100 years - from Hollywood’s humble beginnings to today’s blockbuster motion pictures, television shows and new digital platforms - the Hollywood Museum is home to the largest entertainment collection on public display, and is a ‘must see’ for visitors from around the world.

Inspired by her godfather, concert-great classical pianist and conductor, José Iturbi, Donelle co-founded the José Iturbi Foundation dedicated to sharing and popularizing the wonders of classical arts and music with audiences around the world, including sponsoring blockbuster concerts at the Hollywood Bowl. For more than 20 years, Dadigan has been involved with community groups and charitable organizations in Hollywood and California. Today, Dadigan is co-chair of the Hollywood Historic Trust, a duty passed on from the late Johnny Grant; she sits on the Board of Directors of the Hollywood Chamber of Commerce, and the Hollywood Police Activities League, among others. Additionally, she has served on the boards of service organizations in the Hollywood Community, including the Hollywood Business Improvement District, the LACER (Literacy, Arts, Culture, Education, Recreation) after school programs, Hollywood High School, and PATH (People Assisting the Homeless). Donelle’s impact on the Hollywood community has been recognized by numerous awards.