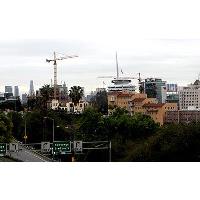 Voters head to the polls on March 7th to cast votes on what may be the most critical election in a generation on the future course of Los Angeles. Measure S, previously referred to as the “Neighborhood Integrity Initiative”, would immediately clamp down on development, with a moratorium of at least two years on projects that require plan amendments, zone changes, or adjustment to height restrictions. It would also prohibit spot zoning, and require the city to complete studies of the environmental impact of new projects rather than the developers.

“The Hollywood Chamber of Commerce is strongly opposed to this measure,” stressed Leron Gubler, Chamber President & CEO. “While we recognize the need to update community plans, this measure goes too far and will have a negative impact on our economy.”

Gubler cited a study by Beacon Economics that concluded, “If adopted, Measure S will have the effect of halting construction, stifling the economic activity and job creation as a result of that construction, cost Los Angeles millions in tax revenue and make an already dire housing situation much worse.”

The report concluded that Measure S would cost L.A. over 12,000 jobs annually, with 57 percent of these jobs in the construction sector. The lost construction activity is estimated to generate $1.9-billion in economic output in a single year. The construction activity associated with those projects, is estimated to generate over $642-million in wages for workers in L.A. The City is projected to forgo $142-million annually in economic output.

In addition, the report says that Los Angeles would lose over $70-million per year in sales, property, transient occupancy and other fiscal revenues with the passage of Measure S – enough to hire over 1,000 new policemen or firefighters.

Of particular concern is the impact on residential construction. Beacon Economics estimates that the measure would put additional strain on the housing supply and put upward pressure on rents. Affordable housing advocates are very concerned about the impact on their ability to move forward with projects, and have allied themselves with the opposition.
In November, voters passed Measure HHH to provide $1.2-billion to build housing for the homeless. Subsequently, the City determined that eleven out of 12 public parcels which had been identified initially as potential sites for the housing would not be available due to the restrictions imposed by Measure S.
Proponents of Measure S say that their goal is to force the City to update its community plans in a more timely fashion. If that is their goal, then they have succeeded. The City Council, on February 8th, voted to update all 35 of the City’s community plans on a six-year cycle, at an estimated annual cost of $10-million. Their vote triggered the creation of a new ordinance now in formation that will mandate the updates.

“I think there is a general consensus that the plans need updating,” said Gubler. “Contrary to public perceptions, the development community is strongly in favor of these updates as it helps them to have certainty as to what they can develop, as opposed to having to seek plan amendments. If the proponents of Measure S had stopped there, no one would have had a problem. Instead, they have proposed a moratorium that will hurt our economy.”

No less an impartial authority than the Los Angeles Times has come out against Measure S. In an editorial which ran Feb. 12th entitled “Measure S is wrong for L.A.” the Times editorialized that “It may be tempting to vote yes because the measure is superficially appealing and speaks to many real problems facing the city. But in fact it’s not a solution; it’s just a way for voters to give a big middle finger to the pols at City Hall and the powerful real estate developers who bankroll them. And while that might feel good on election day, it will unleash a series of consequences – intended and unintended – that will hurt L.A. in the long run by worsening the city’s housing crisis and stifling economic development.”

“The Chamber urges its members to get out and vote against Measure S and to encourage your friends and associates to also do so,” concluded Gubler. “This is a vote about the future of L.A., whether we are going to focus growth along transit corridors and plan for the future or whether we are going to try to go back to the 1950s. It is time to move forward, not back.”
Contact:
Hollywood Chamber
info@hollywoodchamber.net, (323) 469-8311