Foundation Committee to Recognize Exceptional Heroes of Hollywood at Taglyan, 5/31 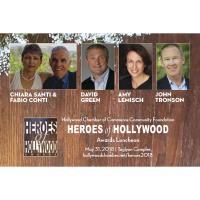 The Heroes of Hollywood Awards Luncheon presented by the Hollywood Chamber Community Foundation will be honoring four exceptional Heroes who have made a difference in the Hollywood community at Taglyan Complex on Thursday, May 31st.

This year, the Heroes of Hollywood Committee is proud to recognize the achievements of the following heroes:

Fabio Conti & Chiara Santi
Our HERO couple Fabio Conti and Maria Chiara Santi both hail from Verona, Italy. The duo are the CEO and CFO of Conti Santi Properties. They are hospitality people at heart, and ran their restaurant, Fabiolus, for 25 wonderful years on the corner of Sunset and Vine. Their restaurant helped bring a sense of community to the area by catering to residents, theatre and moviegoers, as well as studios and offices. Immensely dedicated to giving back to their community, both Fabio and Chiara have been involved with several boards and organizations. Fabio has served on several boards including the Sunset & Vine BID, the Center at Blessed Sacrament, Central Hollywood Neighborhood Council, Cheremoya Foundation, Hollywood Sign Trust, and our very own Hollywood Chamber of Commerce. Chiara served for many years on the board of the YMCA and participated actively in their “A Brighter Future Program” teaching young mothers how to cook and buy groceries on a budget. She currently serves on the Cheremoya Foundation board, organizing events and raising funds to support the students, teachers, and administrators of this historic Hollywood school. They recently sold their restaurant to spend more time with their twin boys.

David Green
Our HERO David Green joined Nederlander West Coast in 1978 and is currently the Senior Vice President and Chief Financial Officer for its legitimate theatre, concert, and real estate activities. A tireless volunteer both in the entertainment industry and the community at large, David has served on the Board of Directors of the I.A.T.S.E. Local 33 Stagehands Union Pension Health and Welfare Trust Funds for over 30 years. David has served as President and Treasurer of the Board of Directors of the Hollywood Entertainment District Business Improvement District (BID). He also served as a Board member of the Hollywood Chamber of Commerce, its Executive Committee and as Chairman of its Hollywood Walk of Fame Committee. David also was a member of City National Bank’s Entertainment Advisory Board and has been a member of the Advisory Committee of Los Angeles Center for Education Research (LACER). David has worked tirelessly to grow the Company’s West Coast presence. He is most proud of his various efforts to help improve Hollywood over the last 30 years; particularly his involvement in the $10-million Pantages Theatre “Lion King” Renovation Project in 2000. He was honored by LACER in 2004 with the Jackie Goldberg Business Community Award, and in September 2011 was the recipient of a Hollywood Community Leadership Award by the Hollywood Police Activities League (PAL).

Amy Lemisch
Our HERO Amy Lemisch oversees the State’s efforts to facilitate motion picture, television and commercial production. In addition to administering California’s Film & Television Tax Credit Program, Amy oversees a wide range of support services and coordinates with all levels of government to create a film-friendly environment. Under her leadership, California has maintained its competitiveness as a production locale amid intense global competition. She helped shepherd passage and implementation of the State’s uniquely targeted tax credit program enacted in 2009. She is also credited with reducing red tape and launching a series of marketing initiatives including co-production of the annual Film in California Conference, publication of LOCATION CALIFORNIA magazine, and administration of the Commission’s first program to expand education/training opportunities for aspiring entertainment professionals. Prior to her work at the Film Commission, Amy served for more than 15 years as a producer for Penny Marshall’s company - Parkway Productions. Her credits as producer include such films as “With Friends Like These,” “Riding in Cars With Boys,” “The Preacher’s Wife” and “Renaissance Man.” She worked as associate producer on “Awakenings,” “A League of Their Own,” and “Calendar Girl.” Amy is a member of the Directors Guild of America and the Producers Guild of America.

John Tronson
Our HERO John Tronson is a Principal with Avison Young Southern California LLC, focusing on its entertainment division and specializing in serving feature film, television and commercial production companies as well as property owners in the Hollywood market. Widely considered one of Hollywood’s leading commercial real estate professionals, John has transacted on many of Hollywood’s most recognizable icons such as the former ABC Studios facility on Vine, the El Capitan office building, the Broadway Hollywood, the historic Hillview apartment building, the Palladium, the Fredericks of Hollywood / Kress building, the First National Bank building, and the Capital Records building. John’s extensive civic contributions include past Chairman of the Board of the Hollywood Chamber of Commerce and President of the Hollywood Entertainment District (Business Improvement District). He joined Ramsey-Shilling in 1993 which later became Avison Young. He graduated from California State University, Northridge (CSUN), where he played men’s soccer and received First-Team All-American honors. He is currently a member of the CSUN Intercollegiate Athletic Advisory Committee and Athletic Directors Advisory Circle.

Additionally, “The Man of a Thousand Voices”, Rich Little, will be honored with The Distinguished Service Award in Memory of Johnny Grant.

Television Actress, singer, and model Diahann Carroll will be honored with the 2018 Mary Pickford Award.

The Community Foundation welcomes back Carole Sarian of The CrisCom Company and Cindy Braun of Braun Consulting as the Heroes of Hollywood event co-chairs. George Pennacchio, ABC7 Entertainment Reporter, will emcee.

Heroes of Hollywood is the most recognized fundraising event of the year for the Community Foundation. The event has saluted over 150 Hollywood leaders – through its predecessor, the Women of Distinction Awards – and has raised over $850,000 since 1993. The event is attended by over 300 dignitaries, community leaders, and special guests and is a premier networking opportunity.

The Community Foundation is an organization within the Hollywood Chamber that promotes the well-being of non-profit organizations in Hollywood. The mission of the Community Foundation is to support and advance the educational, cultural, and economic interests of the community. The Foundation hosts two major fundraisers each year, the Heroes of Hollywood Awards Luncheon and the All Hallow’s Eve Event. The funds are awarded in the form of grants to deserving non-profit organizations serving the Hollywood area. www.hollywoodchamber.net/foundation