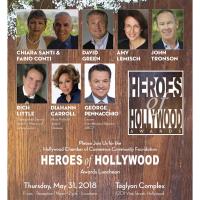 The Heroes of Hollywood Awards Luncheon presented by the Hollywood Chamber Community Foundation will be honoring four exceptional Heroes who have made a difference in the Hollywood community at Taglyan Complex on Thursday, May 31st. The event will start with reception at 11 a.m. followed by Awards Luncheon at 12 p.m.
This year, the program will honor four exceptional leaders who have made a difference in the Hollywood community. The HFoundation is proud to recognize the achievements of these heroes:
Fabio Conti & Chiara Santi David Green, Sr. Vice President/CFO, Pantages Theatre- Nederlander West Coast Amy Lemisch, Executive Director, California Film Commission John Tronson, Principal, Avison Young
Additionally, “The Man of a Thousand Voices”, Rich Little, will be honored with The Distinguished Service Award in Memory of Johnny Grant. Television Actress, singer, and model Diahann Carroll will be honored with the 2018 Mary Pickford Award.  The Community Foundation welcomes back Carole Sarian of The CrisCom Company and Cindy Braun of Braun Consulting as the Heroes of Hollywood event co-chairs. George Pennacchio, ABC7 Entertainment Reporter, will emcee. Heroes of Hollywood is the most recognized fundraising event of the year for the Community Foundation. The event has saluted over 150 Hollywood leaders – through its predecessor, the Women of Distinction Awards – and has raised over $800,000 since 1993. Last year’s event raised over $30,000 in grants, which, in turn, were awarded to non-profit organizations in Hollywood. The event is attended by over 300 dignitaries, community leaders, and special guests and is a premier networking opportunity.