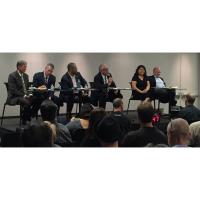 Gubler pointed out that general plan amendments, or “spot zones” as the initiative proponents call them, are often required of projects. He noted that the beautiful new Emerson College campus would not have been allowed had the initiative been in place, because the land had previously been zoned for industrial uses. Given a choice, he said most people would want the award-winning college campus versus an industrial building on the site.

He also stressed that the initiative simply goes too far. The moratorium would impact virtually all projects of any size in the City, including schools, hospitals, parks, Metro projects, airport expansion, harbor development, and even a wetlands project in South Los Angeles.

One little known facet of the initiative is that it requires onsite parking for all restaurants, which would prevent older buildings without parking from being used for future restaurants. This would result in many more empty buildings within the community.

Another aspect of the initiative is that it will subject every building permit to discretionary review. This would impact not only developers but also homeowners. It means that even fences, plumbing replacement and small home additions could be stopped by any neighbor who files an appeal.

He also pointed out that the initiative actually bans planning. It has a clause that does not allow any future community plans to increase density beyond what is currently built within a quarter mile of a project. That would freeze forever what is in place in the City and would not allow communities to designate areas for increased density. It would make it impossible to increase density around mass transit stations, thus negating the whole purpose of investing in mass transit.

“I’m leery of new initiatives because they almost always create more problems than they fix and this one is no exception,” concluded Gubler.