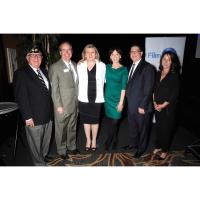 A room full of Hollywood’s business and community leaders came together to witness the passing of the gavel at the Chamber’s 95th annual Board Installation & Lifetime Achievement Awards Luncheon at Hilton Los Angeles/Universal City , on Thursday, March 31, 2016.

Incoming Chair Kalantari immediately started her term with a request asking the audience to join her in singing a special song: the national anthem. She talked about her journey to the United States, challenges through dental school, and growing her Famous Hollywood Dental Care practice in Hollywood. In her role as Chair, Kalantari mapped out the Chamber's next phase ahead:

"There are several ongoing issues with which the Chamber is grappling. Critical and entrenched problems can seldom be resolved over the course of one chair’s term of office. I pledge that the Chamber will continue to devote resources to these priorities, including:
Kalantari noted that other ongoing issues will also receive Chamber attention, including continuing to press for changes to improve the visitor experience on Hollywood Blvd., and reaching out to improve relations with our neighborhoods.

An award-winning dentist with a 24-year track record, Kalantari is well respected in the field of dentistry. She was the youngest graduate in her class at Columbia University’s School of Dental and Oral Surgery. She completed her post-Doctoral residency at Columbia Presbyterian Hospital and has been awarded fellowships from the Academy of General Dentistry and the International Congress of Oral Implantologists. Since becoming the owner of Famous Hollywood Dental Care in 2006, she has been involved with many local charities. Her office has donated the proceeds of teeth whitening services to the Smiles for Life Foundation and raised over $20,000 – half the proceeds benefitting the Hollywood PAL. Last September, she spent 10 days in the Dominican Republic providing dental services to impoverished communities. In 2014, she received the L.A. Top Rated Doctor and Dentist Award. She is the past president of the California Dental Forum and of the Iranian-American Dental Association. She was recently inducted as vice president of the Los Angeles Dental Society. Kalantari has been a Chamber Board member since 2008. During that time, she has co-chaired the Chamber’s Healthcare Committee. She has also chaired the Chamber’s membership committee. She is the first dentist to lead the Hollywood Chamber.

The Chamber honored Marilu Henner with Lifetime Achievement Awards and presented her with a portrait by artist Robert Byrne.

“I have lived and worked in Hollywood for 27 years. My children were born here. Each table at this event from Farmer’s Market to Kaiser Permanente and including this hotel hold special memories in my life (dates available upon request). I am so grateful to the Hollywood Chamber of Commerce for honoring me today. I can’t believe the list of past honorees. They are actors and actresses that I grew up watching on television and the big screen, and I am so proud to be in their company. The people in this room are what Hollywood is all about and I am so humbled, and honored to accept this award and even if I didn’t have the memory I have, I would never forget this day,” stated Marilu Henner, 2016 Hollywood Chamber of Commerce Lifetime Achievement Award honoree.

Incoming Chair Dr Fariba Kalantari and Leron Gubler, President & CEO of the Hollywood Chamber honored Beth Marlis of Musicians Institute as the outgoing chair of the board.

In addition, several new board members were sworn in for the first time, including: Homer Alba of Hollywood Forever Cemetery, Tari Garza of Universal Studios Hollywood, and Francis Y. Park of Park & Velayos LLP.