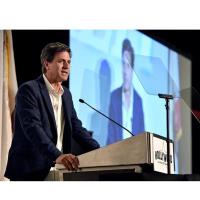 Co-creator and Executive Producer of Modern Family, Steve Levitan was honored with the 2017 Commitment to California Award at the Hollywood Chamber’s annual State of the Entertainment Industry Conference Hollywood Chamber. The half-day conference was held at Loews Hollywood Hotel on November 30th.

Emmy Award-winner Levitan has been dedicated to keeping production of the successful TV series “Modern Family” in California. Most of the production of this popular romantic comedy is executed in Los Angeles, and the show has ventured filming on locations such as Santa Clarita, Lake Tahoe and throughout California. The ABC’s Emmy Award-winning show offered a taste of Tahoe recently when the cast and crew shot the entirety of the season nine premiere on the basin’s South Shore.

Early next year, Levitan will be launching a new TV series “LA to Vegas,” which will be produced in Los Angeles. “LA>Vegas” is an ensemble workplace comedy about a group of underdogs trying to find their place in the world, set on the Friday night flight from LAX to Vegas and the returning flight on Sunday, who all share the same goal: to come back a winner in the casino of life.

The annual Commitment to California Award is presented at the State of the Entertainment Industry Conference to an entertainment executive who has successfully brought in and/or kept groundbreaking entertainment here in California. The revered recipient has made a significant contribution to the creative and economic growth in our state and made a tremendous impact in our immediate community. Past honorees have included Ted Sarandos, Vin Di Bona, Michael Chiklis, Shawn Ryan, Anthony E. Zuiker, and more.