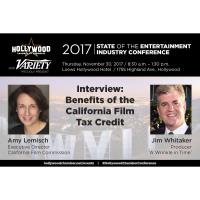 Plans for the Hollywood Chamber’s 2017 State of the Entertainment Industry Conference is well under way. The half-day conference will be held at Loews Hollywood Hotel slated for November 30th. The program will start with networking at 8:30 a.m. followed by a packed agenda through 1:30 p.m. Early Bird Special rate through Friday, November 17th is $129. Admission thereafter is $159.

Jim Whitaker is the producer of the upcoming “A Wrinkle in Time” will be talking to Amy Lemisch, Executive Director of California Film Commission in an exclusive Q&A on how feature films such as ‘A Wrinkle in Time’ benefited from the unprecedented amount of tax credits received for its production in California and insights on the benefits that are going far beyond the project.

Jim Whitaker is the producer of the upcoming “A Wrinkle in Time” Disney movie. With A-list cast such as Mindy Kaling, Oprah Winfrey and Reese Witherspoon, this adaptation of the timeless classic Madeleine L'Engle novel is slated for release in 2018. The epic adventure movie has been one of the 28 projects selected to receive an $18.1 million credit as part of California’s expanded Film & Television Tax Credit Program. It is expected to bring $85-million in qualified spending to California. With nearly 400 cast and crew members employed, $44-million will be paid in wages to below-the-line workers.

“The California tax credit made it possible to base production in California,” said producer Jim Whitaker in an interview with Variety. “We considered several other locations, but felt that the spectacular landscapes and intimate, real settings found in California perfectly met Ava DuVernay’s directorial vision for ‘A Wrinkle in Time.’ The entire crew is incredibly excited as we all appreciate the ability to come home to our families at night.”

The tax credit was raised last year to $330-million annually from $100-million. “Large-scale feature films like ‘A Wrinkle in Time’ are among the most at-risk for runaway production,” said California Film Commission Executive Director Amy Lemisch. “California’s expanded tax credit program is working as intended, and this project alone will employ hundreds of in-state crew members.”

Amy Lemisch discusses the successful rollout of the State’s AB 1839 and the future of film tax incentives and credit program. AB 1839 (Gatto-Bocanegra) created a 5-year program in July 2015 which extends through June 30, 2020. The bill allocated $230-million in its first year and $330-million in each of the following four fiscal years.

The California Film Commission awards tax credits to those productions in each category with the highest jobs ratio. As Executive Director of the California Film Commission, Lemisch oversees all of the State's efforts to facilitate motion picture, television and commercial production. She was appointed by Governor Arnold Schwarzenegger in May 2004, and reappointed by Governor Edmund G. Brown Jr. Under her leadership, the Commission coordinates with all levels of state and local government to promote California as a production locale. Such efforts in-turn create jobs, increase production spending and generate tax revenues.

In addition to overseeing the Commission’s wide range of support services, Lemisch also serves as the state’s leading advocate for educating legislators, production industry decision makers and the public at large about the value of filming in California.

The Entertainment Conference will also include the presentation of the Commitment to California Award, which will go to an entertainment executive who has made a tremendous impact on our great state. Past honorees have included Ted Sarandos, Roy Price, Vin Di Bona, Michael Chiklis, Shawn Ryan, and Anthony E. Zuiker.
“Since this conference was first held six years ago, it has quickly grown into a major confab to discuss the future of our signature industry,” noted Chamber President and CEO Leron Gubler. “Last year’s event drew widespread media attention. We expect this year to be no different.”

Susanne Ault of Variety and Kristin Cavanaugh of Sony Pictures Entertainment are co-chairs of the 2017 State of the Entertainment Industry Conference. Vin Di Bona will return in his role as emcee for the sixth consecutive year.

For more information about the State of the Entertainment Industry Conference, contact Kaylee Kiecker at kaylee@hollywoodchamber.net.
Loews Hotel is located at 1755 N Highland Ave in Hollywood. Register online at www.hollywoodchamber.net/events