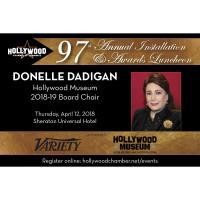 Donelle Dadigan, the President & Founder of the Hollywood Museum in the Historic Max Factor Building, has been elected to lead the Hollywood Chamber of Commerce, beginning in April. She will be installed as Chair of the Board, along with other Chamber officers and directors at the Chamber’s 97th annual Installation & Lifetime Achievement Awards Luncheon, on Thursday, April 12th.

In addition, renowned actress Vanessa Williams will be presented with a Lifetime Achievement Award by the Hollywood Chamber.

The day will begin with a reception at 11:30 a.m. at the Sheraton Universal Hotel, 333 Universal Hollywood Drive, followed by the luncheon at noon. Admission is $75 for Chamber members. Reservations can be made at www.hollywoodchamber.net/events.

Dadigan is President and Founder of two not-for-profit organizations. The Hollywood Museum is dedicated to the history and heritage of Hollywood and the entertainment industry. The José Iturbi Foundation, inspired by Dadigan’s godfather pianist and conductor, José Iturbi, is dedicated to sharing and popularizing the wonders of classical arts and music.

Earlier this year, California Senate President pro Tempore Kevin de León, Chair of the Senate Rules Committee appointed Dadigan to the California Film Commission.Dadigan is also co-chair of the Hollywood Historic Trust and she sits on the Board of Directors of the Hollywood Police Activities League. Additionally, she has served on the boards of many service organizations in the Hollywood community, including the Hollywood Entertainment BID, the LACER after school-program, and PATH among others.

Dadigan’s impact on the Hollywood community has been recognized by numerous awards. She was recognized as one of the Women of Distinction in 2003, and received the Distinguished Service Award in Memory of Johnny Grant at the Heroes of Hollywood Luncheon in 2017.

Jeff Zarrinnam, Owner of Hollywood Hotel, will be honored as the outgoing chair of the board.