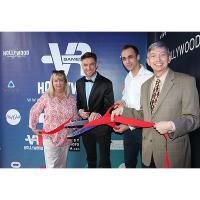 The Hollywood Chamber staff joined the celebration and welcomed new member Virtual Reality Hollywood with a ribbon-cutting ceremony at the grand opening of their arcade location. The celebration continued with an after-party and an open invitation to VR experiences.

Hollywood’s newest attraction is an immersive VR gaming center established in 2017 as the second of three VR arcades in Los Angeles by VR Studios, LLC. They offer an impressive variety of over 80 VR games as well as VR racing experiences with over 100 real cars and race tracks.

Owners VR Studios promise to deliver the perfect ultimate VR experience to video gamers and introduces others into VR world. “We’re very pleased to celebrate the opening of our new VR Hollywood arcade location,” said Dmitriy Zherebtsov, Co-founder, VR Studios LLC. “We invite people from VR business and all enthusiasts to stop by and discover new frontiers in virtual reality gaming.”
The event was hosted by Michael Suvorov and Natalia Krasnova. The event was organized by Keep It Secret event planning agency. The event is supported by such institutions as ICON CDC, and SBDC.

Whether you are looking for fun things to do in Hollywood with the family, your friends, or your team, Virtual Reality Hollywood is now open every day 12 p.m. to midnight and welcomes everyone to dive in the virtual worlds of your dreams and beyond!