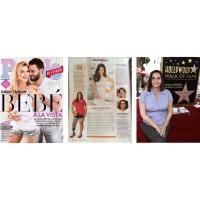 HOLLYWOOD, CA –Hollywood Chamber of Commerce’s Ana Martinez is named one of “The 25 Most Powerful Latina Women of 2016” by PEOPLE EN ESPANOL Magazine amongst leaders in the world of entertainment, communications, business and policy. “We are thrilled to hear that our own Ana Martinez is among the “Most Powerful” honorees this year,” said Leron Gubler, President & CEO of the Hollywood Chamber of Commerce. “Ana is as unique as our Walk of Fame.”

Ana Martinez is the Producer of the famed Hollywood Walk of Fame ceremonies. Having staffed the Walk for nearly half of its history, there is likely no one who knows more about the mechanics and history of the Walk of Fame than Ana Martinez … affectionately known as Star Girl. She started with the Chamber in 1987 as a receptionist and six months later assumed the duties of staffing the Walk of Fame. She has produced more than 600 ceremonies. “When someone finds out what I do for a living, questions fly back and forth about who my favorite star is, what was the most unusual ceremony and more. Never did I think a kid from a small town east of Los Angeles would have such a great job and this amazing honor. I am truly humbled.”

The personalities selected for the list will be honored in a lunch VIP of “The 25 Women More Powerful” on September 16th, in Miami, Florida. PEOPLE EN ESPANOL fans will have the opportunity to see their favorite stars paraded down the red carpet of this event in the digital platforms of the brand. Readers can also participate in powerful LIVE!, a free event which offers fast-paced workshops with experts on such topics as professional advice, fashion and beauty, and more. Powerful LIVE! will be held on September 17th at Miami Dade College, Wolfson Campus.