The Hollywood Chamber of Commerce, in conjunction with Variety and Madame Tussauds Hollywood, presented the 14th annual Awards Media Welcome Center for local, national, and international media credentialed to cover the Academy Awards®. The event took place at TCL Chinese 6 Theatres in the Grauman’s Ballroom on Thursday, February 23rd, from 12 noon to 3 p.m. The Media Welcome Center featured an array of exhibits on Hollywood and offered interview opportunities from entertainment insiders.

The event kicked off as Madame Tussauds unveiled their revamped wax figure of Oscar® winning actress Meryl Streep. Streep’s figure was shown in her gown from her last Academy Award win and was presented for the first time since new paint and detail work has been done. Presenting sponsor Madame Tussauds Hollywood is Los Angeles’ premiere Hollywood destination offering guests the world’s only opportunity to interact with incredibly lifelike iconic figures from the celebrity worlds of film, TV, music, sports and politics. Also presenting this event is Variety, the entertainment industry’s leading provider of the most comprehensive and in-depth news coverage of the motion picture, television and the digital arenas. In conjunction, Top End Constructors had a live demonstration showing the making of a Walk of Fame star and invited the media to take part. Also, attendees had an exclusive sneak peek of the Hollywood Museum’s new Walk of Fame Exhibit.

“Our exhibitors are eager to meet with the press and share the latest updates on what’s happening in Hollywood,” said Kaylee Kiecker, Executive Vice President of the Hollywood Chamber of Commerce. “The visiting press are given the unique opportunity to do interviews and send stories out to their outlets. This annual event is quite popular and it informs the world about what is happening in Hollywood before, during, and after award season,” she added. 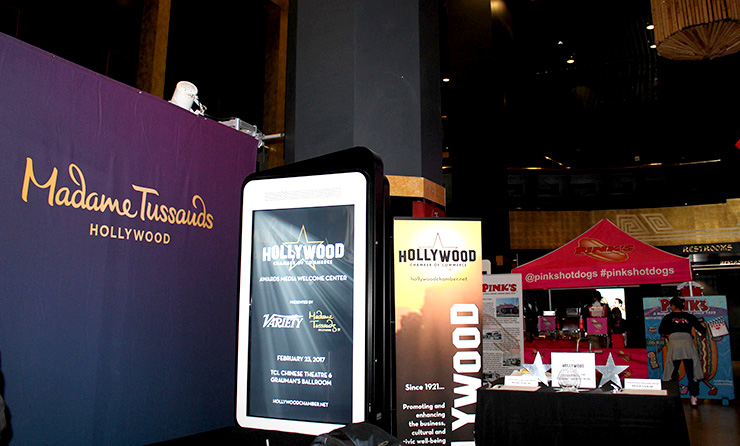 The Hollywood Chamber’s Awards Media Welcome Center offers an opportunity for the AMPAS accredited press to meet and interview Academy Awards® insiders, book authors, museum owners, and others, including business and civic leaders and Hollywood Walk of Fame experts.

View coverage on this event at the below links:

Madame Tussauds Hollywood unveiled the revamped wax figure of Meryl Streep, a current Oscar® nominee for Best Performance by an Actress in the film Florence Foster Jenkins. The Oscar® winning actress has earned 20 nominations with 3 wins during the course of her career. Madame Tussauds representatives were on hand to answer questions pertaining to the famous Madame Tussauds Wax Museum and process involved in making a wax figure.

Variety, the entertainment industry’s leading provider of the most comprehensive and in depth news coverage of the motion picture, television and the digital arenas will have spokespersons on hand to answer questions on all that is Hollywood Entertainment.

Top End Constructors performed a live demonstration of the making of a Walk of Fame star. Attending media learnt the steps involved in the stars from start to finish. They participated in the making of a star and interacted with the process.

Gift of Fame showcased the ceremonial ‘star plaque’ that is awarded to each Walk of Fame honoree for nearly 30 years.

​Leron Gubler, President & CEO of the Hollywood Chamber of Commerce, spoke about the history of Hollywood, the current revitalization taking place and projects such as hotels and studios and new tenants who have moved into Hollywood such as Viacom and Netflix.

Ana Martinez, Vice President of Media Relations/Producer of the Hollywood Walk of Fame celebrating her 30th anniversary working with the Walk of Fame shared her unique experiences about this famous landmark which recently celebrated its 55th Anniversary.

Levi David Tinker, General Manager of The TCL Chinese Theatre IMAX discussed the largest IMAX movie theatre in the world and home to the industry’s biggest red carpet premieres and the legendary hand and footprint ceremonies. This grand movie palace is a historic landmark that receives more than 5-million visitors each year and is currently celebrating its 90th Anniversary with a film series which runs through 2017.

Bliss Spa, located at the W Hollywood Hotel provided neck and shoulder massages to weary camera operators throughout the event while showcasing their unique product line which is a favorite among Hollywood’s elite due to its indulgent ingredients and clever marketing taglines.

Pink’s Hot Dogs, providing ‘Hot Dogs to the Stars’, served press their delicious dogs while talking about their “Celebrity Wall of Fame” which showcases stars who have written about their love of Pink’s.

Hollywood American Legion Post #43 shared stories of their big screen successes as one of the favorite locations for film and commercial shoots. They also unveil plans for their multi-million dollar renovation to their auditorium, featuring state of the art technology.

L.A. Smash Cakes showcased how their desserts are how unique and different these are than any other sweets in L.A. and offered the media samplings of their delicious chocolate.
Metro MD Institute of Regenerative Medicine discussed the innovative services they offer to celebrities to allow them to look younger and stay healthier than ever before imagined. Advanced research and recently adapted practices can help make anyone red-carpet-ready, all year long.

Monster Energy Drink provided beverage to quench the media’s thirst for a delicious drink that enhances stamina and energy.