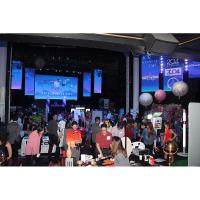 Close to 400 guests attended the 29th Annual Hollywood Expo at the world-famous Avalon Hollywood on Wednesday, April 26, 2017. The Hollywood Chamber of Commerce proudly presented this premiere networking event and provided exhibitors an ideal opportunity to showcase their business and make new introductions. The Chamber would like to thank all the sponsors, exhibitors and attendees who helped celebrate the businesses which make "LA LA LAND' the city of stars!

“This year’s Expo featured some of the best businesses that are new to Hollywood. Also exhibiting were some long standing businesses that have become icons in our community,” said Kaylee Kiecker, Executive Vice President of the Hollywood Chamber. “There were exhibits that featured everything from hotels to hot dogs, museums to musicians!”

The Expo attracted concierges, tour operators, business owners, and Chamber members who are interested in learning what’s new in Hollywood. Guests experienced the grandeur of the beautifully renovated Avalon Hollywood while sampling some of their menu items including seared ahi tuna, peanut soba noodle salad, saffron and roast garlic beef tenderloin, crispy spinach risotto suppli, and fresh avocado tacos. Other highlights included FotoSpark’s interactive photo booth where guests had an opportunity to recreate the classic scene from La La Land and dance among the stars. Marky Make Up brought the crowd to life with unique body art painting demonstrations. Music was provided by Resilience DJs, and many of the vendors offered contests and giveaways at their booths. Hotels, attractions, and business services were represented at this highly-acclaimed event for the Hollywood business community.

For more than 96 years, the Hollywood Chamber of Commerce has provided leadership, business development resources, networking, and government affairs programs and services to keep the Hollywood business and residential communities safe, relevant and economically vital. Kaylee Kiecker is Executive Vice President, Leron Gubler is President & CEO, and Jeff Zarrinnam of Hollywood Hotel serves as the 2017-18 Chair of Board of Directors.
Contact:
Hollywood Chamber
info@hollywoodchamber.net, (323) 469-8311