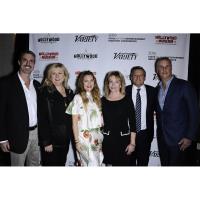 The fifth annual State of the Entertainment Industry Conference, presented by the Hollywood Chamber of Commerce and Variety discussed the topic of “Global Hollywood” at Loews Hollywood Hotel on Wednesday, November 30th. The conference is the pre-eminent local forum that focuses on the importance of the Entertainment Industry to California and steps that need to be taken to keep it healthy.

“Our planning committee has put together the most comprehensive program on the issues and opportunities affecting this industry,” said Leron Gubler, President & CEO of the Hollywood Chamber. “We are delighted with the high caliber of speakers and public officials at the conference this year.”

A special one-on-one interview on “The State of the Music Industry” was conducted between Zach Katz, President, U.S. Repertoire & Marketing, BMG Entertainment and Andrew Barker, Senior Features Writer of Variety.

A spotlight conversation including Amy Lemisch, Executive Director of the California Film Commission, and Paul Audley, President of FilmL.A., Inc, and Actor Jon Huertas was held on the successful rollout of the State’s new film incentives, with information on what comes next.

A host of businesses lined up to support and sponsor the conference. In addition to presenting sponsor Variety, the Platinum Luncheon Sponsor was the Hollywood Museum in the Historic Max Factor Building.