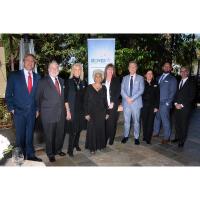 Actress, singer, activist, author and producer Nichelle Nichols was honored with the distinguished 2016 Mary Pickford Award during the Heroes of Hollywood Awards Luncheon. Returning in his role as emcee was once again Robert Kovacik, anchor and reporter of NBC4 Southern California.

Mary Pickford Award recipient actress Nichelle Nichols is a singer, activist, author and producer. Nichols is etched into the annuals of pop culture for her long list of accomplishments. In Nichols’ early career, she toured as a singer with Duke Ellington and Lionel Hampton and has since recorded several albums. She is famously known for portraying Lieutenant Uhura on the original “Star Trek” series, where she became the first black woman to share an interracial kiss on network television. In 1975, she founded Women in Motion, Inc. and became the first woman to recruit minority astronauts for NASA’s Space Shuttle Program. Her outstanding portrayal of Lt. Uhura resulted in six blockbusters and an autobiography published in 1994, Beyond Uhura: Star Trek and Other Memories. Other notable film appearances include “Snow Dogs” and “Are We There Yet?” Many well-remember her recurring role in the hit television series “Heroes.” Additional awards and accolades include receiving NASA’s distinguished Public Service Award, becoming the first African American woman to have her handprints imbedded at the TCL Chinese Theatre in 1991, receiving her star on the Hollywood Walk of Fame, becoming an Honorary Member of the Alpha Sorority, and receiving an Honorary Doctorate Degree from Los Angeles Mission College in 2010. Nichols currently executive produces a television series entitled “Noah’s Room.” Still ever-popular on the convention circuit, Nichols tours the world signing autographs for fans and recently received an Essence Champions Award in 2014.

Our Hero Anastasia Mann is the recognized leader in the travel and tourism industry. Mann is the founder and CEO of the Corniche Group, Inc., renowned for providing exclusive corporate and leisure travel management, tourism, and event planning. In 2004 Anastasia successfully launched Anastasia’s Africa, specializing in private, customized safaris to southern and eastern Africa. In 2007 Corniche Entertainment was born providing music and entertainment for top venues and private events. Anastasia is the namesake of The Travel and Tourism Marketing Association’s prestigious Anastasia K. Mann Leadership Award. A civic leader in Los Angeles, Anastasia Mann is President of the Hollywood Hills West Neighborhood Council, which is the largest of the 96 councils in the greater Los Angeles area serving over 100,000 stakeholders.

Our Hero Jeff Briggs received his undergraduate and law degrees from the University of Minnesota. He was a partner at Gibson Dunn & Crutcher and then at Alschuler Grossman Stein & Kahan, and founded Briggs Law in Hollywood as a solo practice in 2007.Jeff is an experienced trial lawyer with substantial experience in a wide variety of matters from intellectual property to complex business contract issues and corporate governance. Jeff represents a number of Hollywood non-profit community organizations, including the Chamber, several of Hollywood’s Business Improvement Districts, the Hollywood Historic Trust (Walk of Fame), and the Hollywood Sign Trust. Jeff is a past president of the Association of Business Trial Lawyers and of the Century City Bar Association.  Jeff served two terms as Chair of the Board of Directors of the Hollywood Chamber of Commerce, three as Chair of the Chamber’s Community Foundation, and is Secretary of the Hollywood Historic Trust and the Hollywood Police Support Association.  Jeff also is a Vice President of the Friends of Hollywood Central Park, which is building a “cap” park over the 101 Freeway, and a co-founder of Hollywood 4WRD, which is working to end homelessness in Hollywood.

Our Hero Jackie Lawson has served us as the Hollywood Neighborhood Prosecutor. Jackie brings sixteen years of experience to the streets of Hollywood. Jackie is one of City Attorney Mike Feuer’s select team of community specialists, who provides solutions to build and preserve the community's integrity and growth by working closely with the Hollywood Chamber of Commerce, the Hollywood Entertainment District's Business Improvement District, Hollywood 4WRD, law enforcement, City Council, city agencies, and the community. To ensure superior service, Jackie collaborates with and utilizes the vast resources of the City Attorney’s Office to support the community’s needs. Jackie provides personalized solutions to intractable neighborhood issues and quality-of-life crimes, based on the core principles of the law and aligned with the community’s objectives, creating comprehensive solutions with long-term positive results. The confidence and stalwart support of the Hollywood community propels Jackie to be an effective neighborhood prosecutor.

Our Hero Children’s Hospital Los Angeles (CHLA) is the oldest freestanding nonprofit children’s hospital in California. CHLA is a 357-bed facility with 106 pediatric critical care beds, more than any other hospital in the western U.S. CHLA provides pediatric health care to more than 111,000 children each year with 15,682 inpatient admissions, 348,440 outpatient visits, and 77,673 Emergency Department visits and performed 16,262 pediatric surgeries in the most recent year reported.   Established in 1901, CHLA continues today with a vibrant urban campus in the East Hollywood neighborhood. The hospital is home to more than 5,500 employees, and 800 medical staff and experts who have developed more than 350 pediatric specialty programs and services; and is a major research and teaching hospital where scientific inquiry is combined with clinical care devoted exclusively to children and adolescents.  In addition to the excellent clinical care provided within the hospital, CHLA works in collaboration with families, communities, civic and community based organizations, businesses, schools, elected officials, government agencies and others to advance initiatives and develop programs that address the health and social needs of children, adolescents, and families beyond the walls of the hospital.

Our Hero The Gilmore Family are the pioneer developers of The Original Farmers Market at 3rd and Fairfax. Arthur Fremont Gilmore migrated to California from Illinois in 1870 and began a partnership with Julius Carter, running a dairy farm in the Compton area. By 1880, they purchased 256-acres of Rancho La Brea and started their second farm. Ten years in, they split leaving A.F. Gilmore with the Rancho La Brea acreage. A.F. Gilmore operated a dairy farm until oil was discovered beneath it in the early 1900s. The oil discovery led to the development of the Gilmore Oil Company, which at the time was the largest retailer of oil products in the West. The slogan “Roar with Gilmore” was known up and down the Coast with a network of 3500 stations. Gilmore acquired other interests and began development of its real estate holdings. The original 256-acres were subdivided and either sold or developed by the Company; creating a sports stadium, baseball field and drive-in theater. In July 1934, Farmers Market began operation at 3rd and Fairfax.

In the late 1980s, the Company redeveloped the property adjacent to the Farmers Market. It ground leased a portion for the development of the Grove and the balance was developed as office, storage facilities and retail. The Company continues to acquire business opportunities and real estate for redevelopment.

Emcee Robert Kovacik is a newscaster for NBC4 Southern California. Having joined the station in 2004, he is known for bringing viewers in-depth coverage of international events from a local perspective. He has been recognized with numerous industry accolades – most recently being named Television Journalist of the Year in 2013 at the 55th annual Southern California Journalism Awards. He also won a L.A. Emmy for his coverage of the London Olympics. Kovacik is passionate about causes that impact Southern Californians and participates regularly in community events throughout the region. He also serves as the president of the Los Angeles Press Club. Kovacik attended Brown University and Columbia University’s Graduate School of Journalism, where he graduated with honors.