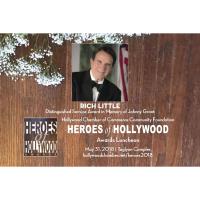 Click here to register for Heroes of Hollywood Awards Luncheon

A master mimic of more than 200 voices, Rich Little continues to impress with a touring schedule throughout the United States and Canada. Infamous for his skewering of political figures, Little has charmed, amused, intrigued and gotten the best of politicians from here to his native Canada. Little also had his own variety show in the 70s, was the star of the TV show KopyKats and even a guest host for The Tonight Show. He quickly became a household name sitting in one of the Hollywood Squares and went on to do The Muppet Show. Named “Comedy Star of the Year” by the American Guild of Variety Artists, Little was the perpetrator of nine comedy albums and three HBO comedy specials, as well as the Emmy-award winning specials Rich Little’s Christmas Carol. In honor of his wife Marie, Little created the Marie and Rich Little Foundation, which focuses on helping children, the homeless and animals in need. Rich is also very supportive of causes for the armed services. 100 percent of proceeds from the sale of merchandise at his performances are donated to The Gary Sinise Foundation. Little is currently working on his latest project, “Little by Little” a self-written, humorous show about his life, featuring over 30 characters. A book of the same title (…Celebrities I’ve Known and Been) has been published August 2016.

Additionally, Television actress, singer, and model Diahann Carroll will be honored with the 2018 Mary Pickford Award.

The Community Foundation welcomes back Carole Sarian of The CrisCom Company and Cindy Braun of Braun Consulting as the Heroes of Hollywood event co-chairs. George Pennacchio, ABC7 Entertainment Reporter, will emcee.

Heroes of Hollywood is the most recognized fundraising event of the year for the Community Foundation. The event has saluted over 150 Hollywood leaders – through its predecessor, the Women of Distinction Awards – and has raised over $850,000 since 1993. The event is attended by over 300 dignitaries, community leaders, and special guests and is a premier networking opportunity. All funds raised from this annual luncheon are awarded in the form of grants to non-profit organizations that are doing remarkable work in the Hollywood community.

The Community Foundation is an organization within the Hollywood Chamber that promotes the well-being of non-profit organizations in Hollywood. The mission of the Community Foundation is to support and advance the educational, cultural, and economic interests of the community. The Foundation hosts two major fundraisers each year, the Heroes of Hollywood Awards Luncheon and the All Hallow’s Eve Event. The funds are awarded in the form of grants to deserving non-profit organizations serving the Hollywood area. www.hollywoodchamber.net/foundation