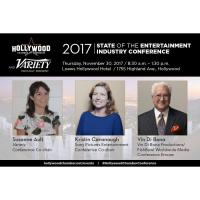 Plans for the Chamber’s 2017 State of the Entertainment Industry Conference are well under way with committee co-chairs Susanne Ault of Variety and Kristin Cavanaugh of Sony Pictures at the helm. This year’s conference will take place at the Loews Hotel Hollywood on Thursday, November 30th. Vin Di Bona will return as emcee.

The half-day conference will start with networking at 8:30 a.m. followed by a packed program through 1:30 p.m. Early Bird Special rate through Friday, November 17th is $129. Admission thereafter is $159.

Co-chair Susanne Ault is the Director of Content Development at Variety. She oversees development of content and on-site execution for all Variety conferences. Ault works closely with sponsorship team to identify strategic revenue opportunities. She contributes to Variety online and print publication through weekly Data Dive column and numerous features spanning digital media, TV, home entertainment and more. “I’m very excited with this year’s lineup of participants, and I think our event will provide crucial strategies on how to drive innovation and growth in Hollywood,” said Ault.

Emcee Vin Di Bona will be returning in his role as emcee for the sixth consecutive year. He recently celebrated 10 years of having a star on the Hollywood Walk of Fame. He is the CEO of Vin Di Bona Productions and Chairman of FishBowl Worldwide Media. A four-time Emmy award-winning producer and eight-time Emmy nominee, he is the creator and executive producer of America’s Funniest Home Videos, the longest-running primetime entertainment show on ABC, now in its 27th year on the air. A pioneer in comedic reality programming and 48-year entertainment industry veteran, his diversified experience in producing and directing includes television movies, broadcast and cable series, network specials, music award shows and variety programming. Under his FishBowl banner, he currently has scripted and unscripted projects in development at ABC, Fox, Bravo, TruTV, VH1, and Adult Swim.

The conference will include exclusive conversations with top level industry leaders. The event will also include the presentation of the Commitment to California Award, which will go to an entertainment executive who has made a tremendous impact on our great state. Past honorees have included Ted Sarandos, Roy Price, Vin Di Bona, Michael Chiklis, Shawn Ryan, and Anthony E. Zuiker.

“Since this conference was first held six years ago, it has quickly grown into a major confab to discuss the future of our signature industry,” noted Chamber President and CEO Leron Gubler. “Last year’s event drew widespread media attention. We expect this year to be no different.”

For more information about the State of the Entertainment Industry Conference, contact Kaylee Kiecker at kaylee@hollywoodchamber.net.
Loews Hotel is located at 1755 N Highland Ave in Hollywood.