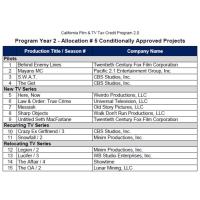 Year-two of California’s expanded Film and Television Tax Credit Program 2.0 will end very much as it began – by scoring new and relocating TV projects ready to create jobs across the Golden State.

The fifth and final tax credit application period (held February 10 – 17) for the current fiscal year brings an additional four relocating TV series; a pair from New York (“The Affair” and “The OA”), and another pair from Vancouver (“Lucifer” and “Legion”). With their arrival, a total of 11 TV series have relocated to California under Program 2.0.

“We’re wrapping up year-two of Program 2.0 on a very high note with a record number of relocating TV series,” said California Film Commission Executive Director Amy Lemisch. “The tax credit program is working as intended to reaffirm California’s status as the preferred choice for film and TV production.”

“Lucifer” co-showrunners Ildy Modrovich and Joe Henderson added, “Los Angeles is a key character in ‘Lucifer,’ with the storylines revolving around iconic locations in Hollywood and Southern California, so we are thrilled that the California incentive now makes it competitive to base the show in the L. A. area.”

In addition to the record number of relocating series, the latest round of TV projects is also notable for the growing number that plan to film outside the Los Angeles 30-Mile Zone. Seven of the 15 projects announced today (“Behind Enemy Lines,” Mayans MC,” “Sharp Objects,” “Untitled Seth MacFarlane Project,” “Lucifer,” “Legion” and “The OA”) plan to shoot at least partially outside the zone. This out-of-zone trend is also evident with feature film projects participating in the tax credit program (see California Film Commission announcement dated February 13, 2017).

“The projects announced further demonstrate Program 2.0’s ability to bring production jobs and spending to regions across the state,” Lemisch added. A total of 25 projects applied for the latest $99.2 million in tax credit allocation. Based on data provided with each application, the 15 projects announced today will generate an estimated $620 million in direct in-state spending, including $235 million in wages to more than 4,400 crew and cast members.

The complete list of conditionally approved TV projects for the latest allocation round is attached. Note the list is subject to change, as applicants may withdraw from the program and their tax credits reassigned to those currently on the wait list.

The next application period for California’s Film & Television Tax Credit Program 2.0 is May 22-29 for television projects.

How Projects are Selected and Awarded Tax Credits Under Program 2.0
Projects approved for California tax credits are selected based on their jobs ratio score, which ranks each project by wages to below-the-line workers, qualified spending for vendors, equipment, etc., and other criteria. The top 200% ranked projects in each round (i.e., those that would qualify if double the amount of funding was available for the current allocation round) are evaluated, and those with the highest-ranked jobs ratios receive tax credits. Those not selected are placed on the waiting list. The program allocates funding in “buckets” for different production categories, including non-independent feature films, independent films, TV projects and relocating TV series. This enables applicants to compete for credits directly against comparable projects. As has been the case since the state launched its first-generation tax credit program in 2009, the California Film Commission awards tax credits only after each selected project: 1) completes post-production, 2) verifies that in-state jobs were created, and 3) provides all required documentation, including audited cost reports.

On September 18, 2014, Governor Brown signed bipartisan legislation to more than triple the size of California’s film and television production incentive, from $100 million to $330 million annually. Aimed at retaining and attracting production jobs and economic activity across the state, the California Film and TV Tax Credit Program 2.0 also extends eligibility to include a range of project types (big-budget feature films, TV pilots and 1-hr TV series for any distribution outlet) that were excluded from the state’s first-generation tax credit program. Other key changes include replacing the prior lottery system with a “jobs ratio” ranking system that selects projects based on wages paid to below-the-line workers, qualified spending (for vendors, equipment, etc.) and other criteria. Program 2.0 also offers an additional five percent tax credit for non-independent projects that shoot outside the Los Angeles 30-mile zone or have qualified expenditures for visual effects or music scoring/track recording. More information about California’s Film and Television Tax Credit Program 2.0, including application procedures, eligibility and guidelines, is available at http://www.film.ca.gov/tax-credit/.

The California Film Commission enhances California's status as the leader in motion picture, television and commercial production. It supports productions of all sizes and budgets, and focuses on activities that stimulate and preserve production jobs, spending and tax revenues in California. Services include administration of the state's Film & Television Tax Credit Program, permits for filming at state-owned facilities, an extensive digital location library, location assistance and a range of other production-related resources and assistance. More information is available at http://www.film.ca.gov.