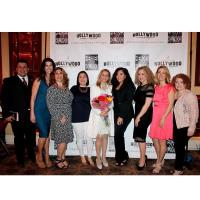 More than 400 people attended the annual fundraiser. Returning for another year in their roles as Co-chairs were Carol Sarian and Cindy Braun. ABC Entertainment guru George Pennachio served as celebrity Emcee.

Our HERO Baydsar Thomasian’s career spans nearly two decades of public service to Hollywood, the City of Los Angeles, and the State of California. Having served Hollywood as a Field Deputy for former Councilmember Jackie Goldberg, Senior Field Deputy for former Council President Eric Garcetti, and currently as Deputy District Director for Senate President Pro Tem Kevin de León, Baydsar has worked selflessly to meet the needs of constituents and community businesses. Her work has impacted tens of thousands of Angelenos and has improved their quality of life.

As a veteran public servant, Baydsar has worked closely with the Hollywood BIDs, the Hollywood Chamber of Commerce, and local businesses to make Hollywood safer, cleaner, and more livable. Since working for Senator de León, her focus has been helping businesses navigate the State bureaucracy, which has resulting in the establishment of hundreds of new businesses and jobs. Currently, Baydsar has direct influence on the passage of bills that affect the community, recently including the Hollywood Film Tax Credits. Among her greatest achievements was helping start the Los Angeles Center for Education and Research (LACER) after school program with Councilmember Goldberg. LACER’s after school program has improved the academic and personal growth of several thousand children in Hollywood.

Baydsar Thomasian has been and remains an inspiration for women and minorities. She has mentored immigrants and disadvantaged youth on empowerment and engagement. Baydsar sits on the Board of the Jesse M. Unruh Institute of Politics at USC as an Ambassador, guiding students to make a difference in society. In 2006, Johnny Grant nominated Baydsar for the Women of Distinction Award, and she was honored to receive it.

Baydsar is married to architect Vahagn Thomasian. They have daughter Soseh, 15. She credits the continued support of her husband and daughter for her many achievements.